Building a container terminal and heavily trafficked pavements over extremely soft subsoils can be one of the most challenging civil engineering aspects. Especially weak soils that are also heavily waterlogged. This was the case for a site in Jomvu where a damaged main line supplying fresh water to Mombasa had saturated the soils leaving the water table only 20cm below ground level. Simply adding more murram or aggregate could only provide a short-term fix as the imported material kept intermixing with the subsoil and disappearing with traffic passing over. Excavating the soft black cotton soil was also not an option as the water table was too high.

Geotextiles East Africa Ltd was prepared to take on the challenge and revolutionise pavement construction by adopting a Geosynthetic solution, which was considered a fairly ‘new’ concept in East Africa. By first addressing the water issue, GEA was able to lower the water table and accelerate consolidation time of the in-situ soils by installing a herringbone subsoil drainage system using HDPE slotted geopipes wrapped in drainage aggregate and nonwoven geotextile. In a matter of weeks the subsoils were bone-dry and filtered water was collected in a soak pit which could be re-used during construction, and later on irrigation. After the main line was repaired, works to reinforce large areas over soft subsoils were completed. After levelling and compacting the ground a 200gsm nonwoven geotextile was placed to separate the imported fill material from mixing with the soft subsoils. Secugrid geogrid was then placed directly on the geotextile immediately improving the soil bearing capacity. The superior reinforcement capabilities of Secugrid distributes point loads through the robust grid over a larger surface area. 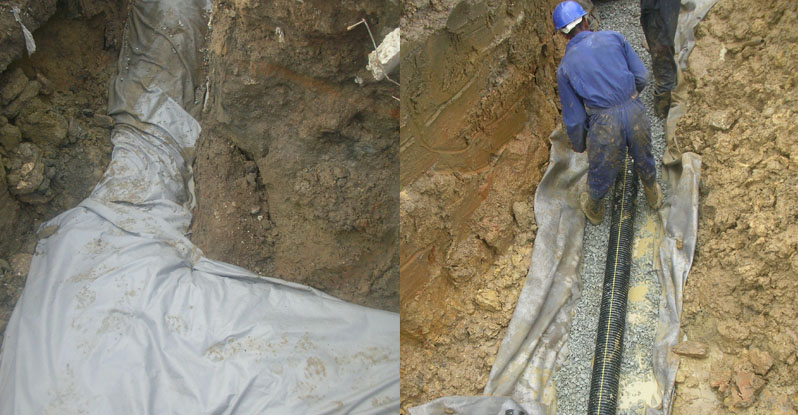 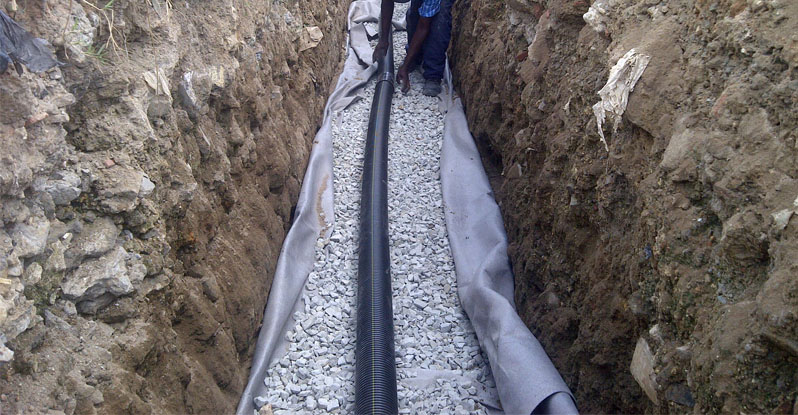 GEA’s design using Geosynthetics in the civil engineering aspect of this project enabled a much more economical and efficient means of constructing the logistics centre for Kuehne+Nagel in Jomvu, Kenya. Had the building contractor used conventional means (excavating and removing all the soft subsoils and replacing this with imported fill material) the costs would have been significantly higher. Instead, using Geosynthetics as an alternative solution reduced the total project costs and significantly reduced the volume of fill material that would otherwise have been required. A base course layer of 0.45m-thick was achieved instead of 1.0m-thick had there been no geotextile separation layer and geogrid reinforcement. The construction time was also reduced remarkably as the rolls are quick to install and less fill materials were needed.

Secugrid geogrid distributes loads over a greater area via its flat, stiff bars. Secugrid is able to do this through its interlocking of granular material with its geogrid apertures and the friction between the soil and textured surface of the flat Secugrid bars. This outstanding interlocking performance with aggregate and high tensile stiffness of the Secugrid reduces soil deformation and ensures high integrity of reinforced soil structures. 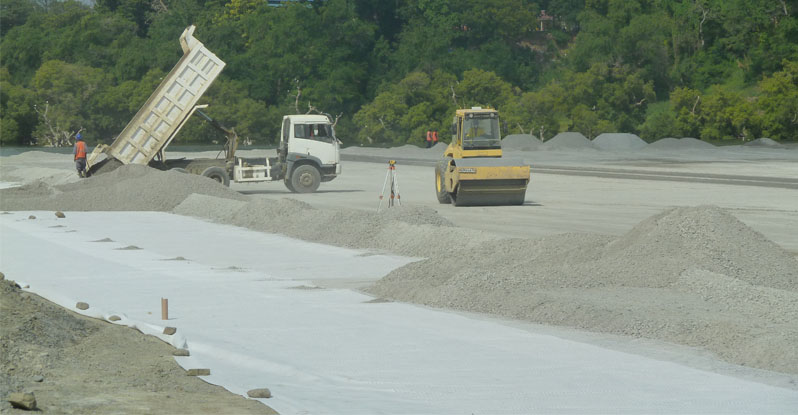 Aggregate base course being levelled and compacted.

Find out more about the products used: